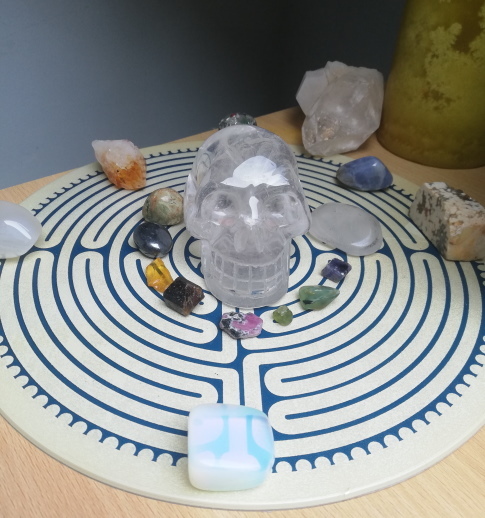 I was working from home and my desk was a bit messy so I rearranged the computer, keyboard, speakers and mouse mat which was a print of the magnificent labyrinth at Chartres Cathedral.

An idea struck me how the labyrinth was circular and had tiny projections on its circumference... not unlike a virus the world is getting to know. What if I set up a healing grid or mandala of crystals on the labyrinth and create an energy field of healing? In my labyrinth grid I could place crystals to "sing in a choir", in the choir stalls of the labyrinth.

I started by cleansing all the crystals I could put my hands on and then got a strong feeling to place a crystal skull in the centre. I also got the strong feeling to put a picture of my favourite holy person under the skull to remain hidden for 3 days.

The labyrinth worked because it was used in times past by pilgrims who couldn't make the journey to Jerusalem, because of danger of travel, hence the labyrinths other name, Road to Jerusalem. It's a sort of medieval lock down memory which ties in with our present day lock down.

The centre of the labyrinth has a circuitous route and at its centre I placed the skull. As this was Good Friday 2020, Easter was on my mind and Golgotha was the skull shaped hill on which the crucifixion occurred, a place of death leading to life.

When the Golgotha grid was finished I simply placed my hands over it to let the energy sing, as I listened to Taizé chant and let the Divine Mind bring the sacred energy to wherever it was most needed.

As I worked away during the day it reminded me of being spirit, having an earthly experience. It also reminded me death is temporary. Been there, done that, over and over. It reminded me also of the power of creation and intent, of bringing the sacred into the working day and to imbue all aspects of life with awareness.

On Easter Sunday I took the skull out to reveal the broad smile of my inspirational holy person and again sent healing to wherever it was needed.

“For what is prayer but an expansion of yourself into the living ether?” - Rumi

Martin and Bernadette Mac have also written a Blog on the creation and experience of the An Tobar Labyrinth.... read more here - Magic of the Land - Labyrinth at An Tobar, Co. Meath