Discussion at a meeting flows better using a talking stick. It maintains order and allows each voice to be heard. In the recognised structure of the get-together it is correct, polite, and respectful that the person holding the stick is the only one allowed to speak.

Talking sticks are often very decorative and designed to carry symbols that will resonate with what is being discussed.

The person who holds the stick often finds themselves fascinated with the feel of the wood and the decorations. It is said that the stick occupies the wanderings of the mind, thus the words spoken come from the heart. 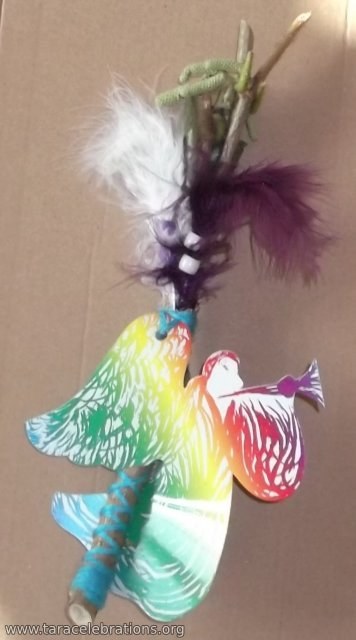 This talking stick was created by Nora for a discussion panel in 2012 on how to lead meditations.

The angel, with wings spread as if in flight, signified communication between realms and coloured to represent the four elements of earth, air, fire and water.

The stick was from a hazel bush, taken after asking the hazel's permission and getting an intuitive 'yes, you may use me'. It had a couple of catkins representing fertility.

The feathers recalled our connection to the spiritual realms and also to the freedom of flight, not just spiritual but also mental freedom.

At Samhain 2016 some of us got together to review and learn from the previous 8 gatherings of the annual cycle and to outline possibilities for the next round.

A talking stick, specially made and full of symbols, was created by Pat for this event. 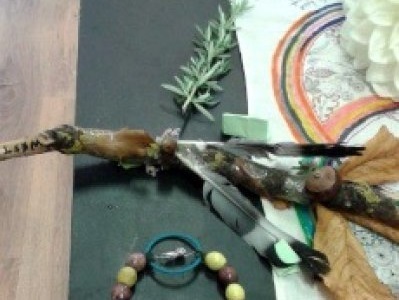