In our ceremonies, which are usually held outdoors, each one joins to individually and collectively acknowledge the presence of all beings who surround us and live amongst us. Some describe it as 'calling in the directions'. I regard it as introducing ourselves and making contact with the spirits of place who inhabit the earth with us.

Many of the great world religions regard secular and sacred as separate, occupying different places in the physical realms, in our thinking and in our emotional lives. We need to visit a building, church or temple imagined and raised by humans wherein the god/s reside and where we can access spirit through a priest or similar intermediary.

However, in the oral traditions it seems our ancestors believed that we share our day-to-day world with these other beings and that there is merely a thin veil between the secular and sacred. The whole universe is alive and we share our space with all beings. They are in our peripheral vision, beside us now. Sometimes they will be visible to us, and as we would expect them to be respectful to us, we should berespectful to them. Thus, the same natural world, including trees, stones, waterfalls, animals and birds present in our world is also present in their realm.

In the secular, early medieval Irish Brehon Laws, civil codes of behaviour based on oral tradition ensured that people acted for the good of the whole community. Amongst their Laws, they identified the prime role and importance that the trees have in the life of us all. Divided into four categories the highest, the seven Nobles of the Wood (which included holly) were protected with the strongest penalties -felling one of these carried a fine of two and a half milk cows.

Thus, trees were protected from felling by the Brehon Laws but they were also protected by folklore and taboos (you may want to call them superstitions) that many believed. They were the homes of the 'good folk' or 'gentle folk' and that was why they should not be cut down. It would bring bad luck.

https://www.duchas.ie/en/cbes/... the road from Moville to Greencastle, there are many trees of holly. The old people tell us that a boy went out one day to get some holly, and he told a man that he was going to take holly from these trees. The old man told him not to take the holly because it was fairy holly. The boy did not listen, and he gathered the holly, and off he went home. About a month after this occurrence, the boy had to be taken to a lunatic asylum. The people said that the fairies punished him for taking the holly.

At Samhain we discovered where the legendary genus loci, the Aes Sidhe, reside. At Winter Solstice we consider folklore, traditions and customs associated with holly and the 'good people' who inhabit the trees and plants. Do you believe in fairies? Our ancestors certainly did and they wove stories and myths around them.

In winter, hours of daylight diminish, we get up and go to bed in the dark. It is as if the sun is abandoning us. Light is dull, skeletal trees appear dead,and joy seems to have left the world. Yet, there is hope. We remember last year the rising sun appeared in the same place for almost a week, as if it stood still, then started getting brighter. And each day it's rising place was a little further north, each day getting closer to us again. Last year in the worst times there was a moment of turning. Thus we look for this turning again this year, the shortest day in the year. 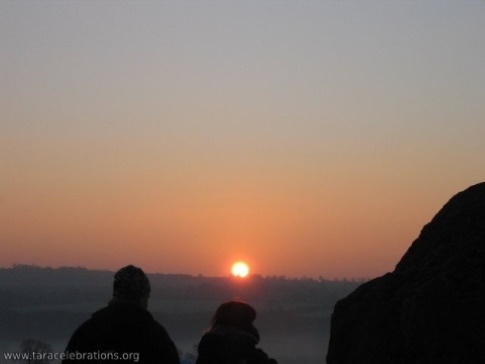 Anticipated for months the turning arrives. We know that the long dark days of winter areover. When this happens we will celebrate with a big feast. Every household celebrates. Food and drink, stored for this special occasion can be brought out from it's dark cupboard and echoing the returning light outside we bring that light indoors and decorate our homes with candles and anything that twinkles like the stars.

Thus in Ireland the Winter Solstice celebration and Christian Christmas harmonise. The birth of the Christ child, merges with the rebirth of the sun, into a general feeling of the joy at the return of the light.

What has survived in this time of deepening dark and cold, trusted in the promise of better days, had faith in the return of the sun? The evergreen bushes and trees. We can learn from them. It seems that they have never given up hope, they know that life will continue, for they retain their leaves all year. In the bareness of winter they are a sign of life to come. It seems a great idea to share in their hope,to bring them closer to us. And the evergreen that is most prolific is the holly.

For such a prickly plant it also seems benign and protective of it's environment. It's dense mass of branches and evergreen foliage provide shelter for birds and animals. Blackbirds love to nest in it and in early winter the full red berries provide plenty of food for birds, especially blackbirds, bullfinches, blue tits and thrushes.

Long before the Victorians brought evergreen conifers into the house, our ancestors decorated their homes, in honour of the big feast, with holly. People imagined that every evergreen had a special blessing attached to it and furthermore if the plants were heavy with fruit (the female holly bush produces the bright red berries), that was an extra blessing for the harvest in the coming year.

About a week before Christmas the women would clean the house, dusting and preparing, even whitewashing the walls. Collecting the holly was usually a job for the men and boys. They worked in the fields and holly leaves provided winter fodder for the livestock. Although to fell a whole tree was said to bring bad luck, boughs could be cut for cattle food and decorations. The men knew which trees to leave and which could be cut and brought into the house without bothering the fairies too much. They knew the'gentle' places in the corners of fields where fairies are supposed to dwell. They knew where on the hills holly bushes preferred to grow. They knew where the fairies would come out after midnight, where they danced and sang around the holly trees.

In fact, sometimes the fairies may come into the house with the holly. On Christmas Eve the grandmothers would tell the children that there was a fairy (or angel or saint if you wanted to Christianise the story) on the tip of each spike of the leaves.

Holly leaves, waxy and shining as if polished, reflect candlelight very well and add to the warmth and cheer. Yet it is a rather tough, spikey, inflexible sprig. Thus we interweave it with ivy. Softer and contrasting, we might understand it today as a yin to the holly's yang. The lovely dark green glossy leaves are enhanced with coloured papers. They are draped over the pictures, on the window sills and along the walls.

Not forgetting the animals, it is also the custom to put a piece of a holly in the cow byre, as it is said to bring them luck and protection.

In the churches the baby Jesus is laid in his crib of straw and it is decorated with holly. Here another significance is added to the holly, as in Christian symbolism the prickly leaves are Jesus' Crown of Thorns and the berries with the drops of blood shed for humanity's salvation. Yet superstition goes with us into church as another custom is getting a whisp of straw out of the crib. Do this and you will never be without money. Get a piece of holly or ivy from the crib and keep it in your pocket and you will have good luck, but do not lose it or you will have bad luck.

6th January is Little Christmas, Epiphany, Women's Christmas. It is sometimes called the Twelfth Day and for some it is imperative that the holly is taken down and burnt on that day or bad luck will befall the household. However, each family develops it's own traditions, and many keep the holly for pancake night, Shrove Tuesday. Holly burns with a fierce flame and it is said that you will live a long time if you burn the holly in the fire for frying the pancakes.

From the medieval text Death of Fergus (Aidedh Ferghusa meic Léide) :
Holly, burn it green; holly, burn it dry; Of all trees whatsoever the critically best is holly.

To regard holly as a luck bringer is not limited to the Christmas season. Evil spirits and negative thoughts and nightmares may become emeshed in the thorny branches, much like a dreamcatcher will catch negative influences in it's web. As the first rays of the morning sunrise land on the dream catcher, the bad dreams are transformed.

Holly is often planted near houses as there is a long time tradition that the tree offers some protection from fire and lightning. It is thought that the spines of holly leaves can act as tiny lightning conductors. Whether this is true is open to debate, but it is accepted that oak trees seem to be regularly struck by lightning, indeed they appear to attract it, whereas holly has a low expectation of being struck.

With all this in mind we can incorporate the holly into our ceremony. We bring it into the centre of our circle, making a wreath or spiral with ivy, mistletoe and yew, using branches that have naturally fallen if possible. The never ending circle of the wreath recalls everlasting life. Or, remembering it's wonderful properties, we burn holly in a fire to bring good luck, casting away anything we want to release as each throws a sprig into the flames. We symbolically bring in the NewYear with the fire and may want to keep some of the ashes for our next Winter Solstice. With a bit of preparation holly leaves can be infused with spring water overnight and used as a blessing for ourselves and for the land.

There is are markable breakdown of taste and intelligence at Christmas time. Mature, responsible grown men wear neckties made of holly leaves and drink alcoholic beverages with raw egg yolks in them.
P. J. O'Rourke