16th May - St. Brendan the Navigator

Saint Brendan of Clonfert is one of the early Irish monastic saints and one of theTwelve Apostles of Ireland.

Naomh Breandán, Bréanainn was derived from a Welsh word meaning "prince". He is also known as"Brendan moccu Altae", called "the Navigator","the Voyager", "the Anchorite", and "the Bold".

Brendan was born in AD 484 in the Kilfenora / Fenit area on the North side of Tralee Bay, Co.Kerry, to Finnlug and Cara of the Altraige tribe. He was baptised at Tubrid, by St. Erc.

After a year at home with his parents, he was fostered by the local chieftain, ortaoiseach, Airde MacFiadaigh, at his fortress Cathair Airde. He was educated for five years with St. Ita and then sent back to St Erc who undertook his education for several years before indulging the boy’s desire to travel and study under other holy men. Erc asked only that he could perform his pupil’s ordination as a priest, and Brendan duly returned for this ceremony. Among the Irish saints Brendan visited were Finnian of Clonard, Enda of Aran and Jarlath of Tuam. St Brendan completed his studies under Saint Erc, who ordained him priest in 510.

St. Brendan is associated with a number of monastic sites close to the River Shannon and around the west coast of Ireland. In addition, he voyaged to Scotland, founding a monastery on Arran and visiting other islands. He is said to have met Saint Columba on Hynba Island, Argyll, in Scotland, and even to have gone to Brittany in France with Saint Malo, a Welsh monk. He may also have stayed at Llancarfan, the Welsh monastery founded by Saint Cadoc.

St Brendan built monastic cells at Ardfert, and, at the foot of Mount Brandon, Shanakeel - Seana Cill, usually translated as "the old church" - also called Balynevinoorach -.Ballyvourney. From here he is said to have set out on his famous voyage for Paradise. 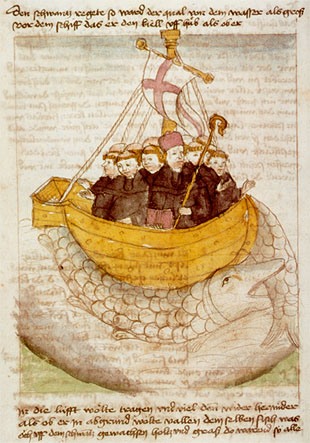 A manuscript, called Navigatio Sancti Brendani Abbatis, ‘Voyage of St. Brendan the Abbot” was written in the 9th Century. It tells the story of St Brendan’s voyage in search of Hy Brasail, or the Island of the Blessed. This voyage lasted for seven years. He probably travelled to Iceland, Greenland and maybe even America. The manuscript is full of the adventures of St. Brendan’s journey. Many versions exist, that tell of how he set out onto the Atlantic Ocean with sixty pilgrims (other versions have fourteen, plus three unbelievers who join at the last minute) searching for the Garden of Eden.

One of these companions is said to have been Saint Malo. If it happened, this would have occurred sometime between 512-530 AD, before his travel to the island of Great Britain. On his trip, Brendan is supposed to have seen St. Brendan’s Island a blessed island covered with vegetation.

He also encountered a sea monster, an adventure he shared with his contemporary St. Columba. His most commonly illustrated adventure is his landing on an island which turns out to be a giant sea monster called Jasconius or Jascon. This too, has its parallels in other stories, not only in Irish mythology but in other traditions, from Sinbad the Sailor to Pinocchio.

An epic modern voyage led by Tim Severin in the 1970’s showed that it was possible to sail a coracle of wood and leather to America, and consequently that Irish monks might indeed have preceded Christopher Columbus by several centuries.

As the legend of the seven years voyage spread, crowds of pilgrims and students flocked to Ardfert. Religious houses were formed at Gallarus, Kilmalchedor, Brandon Hill, and Inistooskert in the Blasket Islands, in order to meet the wants of those who came for spiritual guidance from Saint Brendan

St Brendan died in 578 at Annaghdown and is buried at Clonfert. He is known as the patron saint of boatmen, mariners, sailors, travellers, and whales.

His name is given to several Irish landmarks, including Mount Brandon, On the 3200-foot high summit are the ruins of a small beehive-shaped chapel commanding views of up to 100 miles in distance. There, it is said, the saint had a vision of the Promised Land. Brandon Creek and Brandon Bay are also named after him.