Saint George's Day is celebrated on 23rd April, the traditionally accepted date of the saint's death in AD 303.

St George was born sometime around the year 280 in what is now Turkey. He was a soldier and rose up through the ranks of the Roman army, eventually becoming a personal guard to the Emperor Diocletian. He was executed for being a Christian and is buried in the town of Lod in Israel.

St George is most widely known for slaying a dragon. According to legend, the only well in the town of Silene was guarded by a dragon. In order to get water, the inhabitants of the town had to offer a human sacrifice every day to the dragon. The person to be sacrificed was chosen by lots. On the day that St. George was visiting, a princess had been selected to be sacrificed. However, he killed the dragon, saved the princess and gave the people of Silene access to water. In gratitude, they converted to Christianity. It is thought that the dragon represents a certain type of pagan belief that included the sacrifice of human beings.

St. George's Day was once celebrated as widely as Christmas. But the celebrations waned by the end of the 18th century after England had united with Scotland on 1st May, 1707. In recent times, there has been a push, involving campaigns and petitions, to make the day a public holiday in England.

Salisbury holds an annual St. George's Day pageant, the origins of which are believed to go back to the 13th century. 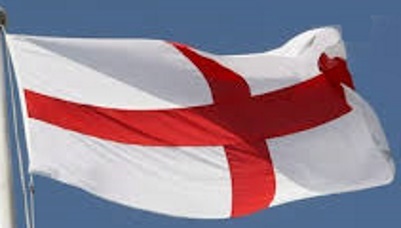 St George is the patron saint of a number of other places, such as Bulgaria, Ethiopia, Georgia, Greece, Portugal and Russia.

The most widely recognized symbol of St George's Day is St George's cross. This is a red cross on a white background, which is often displayed as a flag. It is used as England's national flag, forming part of the Union Flag, the national flag of the United Kingdom of Great Britain and Northern Ireland.

During the crusades in the 1100’s and 1200’s, English knights used St George's cross as part of their uniform. It has been the official flag of England for centuries, but the Union Flag, a combination of St George's cross, St Andrew's cross and St Patrick's cross, is the national flag of the United Kingdom. A custom on St. George's day nowadays is to fly the St. Georges Cross Flag.

Christians in the Middle East continue to celebrate St George's Day, and the custom has been adopted in Muslim tradition via identification of the saint with the figure of Al-Khidra and an association in folk belief with medicine and healing.

The feast is held on 5th May in the Palestinian town of a-Khader which is just south of Bethehem. Historically, the feast attracted Arabs from throughout Palestine to visit the Monastery of St. George. On the morning of 6th May, they would march in a procession from Beir-Jala, Bethlehem, Beir Sahour and other parts of Palestine to the monastery.

Saint George's Day(Jeries) is celebrated widely in Jordan where many churches are dedicated to St. George, especially in a town near Amman called Fuheis.

It is celebrated throughout Lebanon, but especially in towns and villages where churches for St. George have been erected.

Many Syrian Christians celebrate St. George's Day. The small children dress as dragons and are chased through the streets. Following this, participants traditionally dine and dance. The monastery of Mar Jurjus (St.George) dates back to the 6th century and is a regional centre of Orthodox Christianity.