References to the occasion after the Battle of Worcester in September 1651, when King Charles II of England escaped the Roundhead army by hiding in an oak tree near Boscobel House. 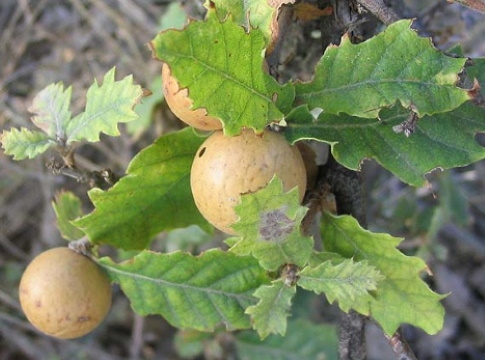 Traditional celebrations to commemorate the event often entailed the wearing of oak apples (a type of plant gall, possibly known in some parts of the country as a "shick-shack") or sprigs of oak leaves. Anyone who failed to wear a sprig of oak risked being pelted with bird's eggs or thrashed with nettles.

In Sussex, those not wearing oak were liable to be pinched, giving rise to the unofficial name of "Pinch-bum Day"; similarly it was known as "Bumping Day" in Essex.

In Uptom Grey, Hampshire, after the church bells had been rung at 6am the bell-ringers used to place a large branch of oak over the church porch, and another over the lych gate. Smaller branches were positioned in the gateway of every house to ensure good luck for the rest of the year.

Events still take place at Uptom-on-Severnin Worcestershire, Marsh Gibin, Great Wishford in Wiltshire (when villagers gather wood in Grovely Wood), Aston-on-Clune in Shropshire, Membry in Devon. and at Mosley OIdHall, West Midlands, one of the houses where Charles hid in 1651.

At Fownhope in Herefordshire the Heart of Oak Society organize an annual event, where members of the society gather at the local pub and march through the village holding flower and oak leaf decorated sticks, whilst following the society banner and a brass band. The march goes first to the church for a service, and then to houses who host refreshments. The Heart of Oak Society was previously a Friendly society, but had to reform in 1989 to keep the tradition going. Although Oak Apple Day celebrations have decreased in popularity and knowledge, Fownhope has managed to keep the event going, increasing in popularity and turn-out every year.

At All Saints Church, Northhampton, a statue of Charles II is garlanded with oak leaves at noon every Oak Apple Day, followed by a celebration of the Holy Communion according to the Book of Common Prayer.

Oak Apple Day is also celebrated in the village of St Noet. in Cornwall, where the vicar leads a procession through the village, followed by the Tower Captain carrying the Oak bough. A large number of the villagers follow walking to the Church. A story of the history of the event is told and then the vicar blesses the branch. The Tower Captain throws the old branch down from the top of the tower and a new one is hauled to the top. Everyone is then invited to the vicarage gardens for refreshments and a barbecue. Up to 12 noon villagers wear a sprig of "red" (new) oak and in the afternoon wear a sprig of "Boy's Love" (Artemisia abrotanum); tradition dictates that the punishment for not doing this results in being stung by nettles.