Saint Colmcille is one of the three patron saints of Ireland, with St. Patrick and St.Brigid of Kildare. He was also known as Columba. The 'cille' suffix that was added to the end of his name means 'of the churches'.

St Colmcille was born on 7th December 521 to Fedlimid and Eithne of Cenel Conail at Lough Gartan, in Donegal. On his father's side, he was great-great-grandson of the 5th Century High King Naill of the Nine Hostages. He was originally christened Crimhthann (meaning 'Fox') at Temple-Douglas, Donegal.

With other princes, he is sent for fosterage in his youth, and spends some years at the house of Cruithnechan, with his teacher and foster-uncle St. Crunthan.

He was sent around the country to be educated. First to Moville on Strangford Lough, under the tutelage of Saint Finnian, before moving south to Leinster, where he studied under the bard, Gemman.

Colmcille entered the priesthood at the age of 20 when he became a pupil at Clonard Abbey, situated on the River Boyne in Meath. The final stop in Colmcille's education was at Saint Mobhí's school in Glasnevin, but his time there was cut short by the arrival of the plague in Leinster and he returned to Ulster.

Colmcille's cousin granted him a portion of land in a place called Daire Calgach, on the west bank of the Foyle. He decided to start his own monastery. He built a church there called Dubh Regles. Daire is the old Irish word for oak tree, and the place became the city of Derry.

Colmcille founded some 30 monasteries in just 10 years, incuding Durrow in Offaly, Kells in Meath and Swords near Dublin.

His strong personality and forceful preaching ruffled feathers. Around 560, he became involved in a quarrel with St. Finnian of Moville Abbey over a psalter. Colmcille copied the manuscript at the scriptorium, intending to keep the copy. Saint Finnian disputed his right to keep this. The argument eventually led to the Battle of Cúl Dreimhne, the Battle of the Book, in Cairbre Drom Cliabh , Drumcliffe, Sligo in 561, during which many were killed.

He was also accused of starting a war between two Irish tribes, the clan Neill, against King Diarmait at Cooldrevny

In 563, after the death of Prince Curnan of Connaught – who Colmcille was meant to protect– a number of clerics and scholars threatened to excommunicate him. Instead, Colmcille was sentenced by the high king never to see Ireland again, and was exiled to Scotland with 12 companions. They sailed over to Scotland in a currach and according to legend he first landed on the Kintyre Peninsula, then settled on a bleak Scottish island called Iona where he would spent most of his remaining years.

In 575, Colmcille was persuaded to visit Ireland to mediate a dispute between the high king and the league of poets. Insisting on remaining faithful to the terms of his exile, that he never ‘see’ Ireland again, he travelled blindfolded.

His considerable reputation was respected by everyone in Ireland. He spoke to the assembled nobles and clergy with such force and authority that the king was persuaded to calm hostilities.

On 22nd August, 565, St Colmcille is said to have encountered the Loch Ness Monster – which has been interpreted as the first ever reference to the mythical Scottish beast.

Traveling in Scotland,Columba had to cross Loch Ness, but Nessie had other ideas. Raising his hand to make the sign of the cross, Colmcille commanded the beast, saying,

"You will go no further, and won't touch the man; go back at once."

At the voice of the saint, the monster fled as if terrified,

"more quickly than if it had been pulled back with ropes.”

The local pagans were amazed and converted to Christianity based on the miracle.

A number of miracles have been attributed to St Colmcille – such as healing people with diseases, expelling malignant spirits, subduing wild beasts, calming storms, and even returning the dead to life.

He is also said to have performed ‘agricultural miracles’ that would hold a special significance to the common people of Ireland and the British Isles, such as when he caste a demon out of a pail and restored spilt milk to its container. 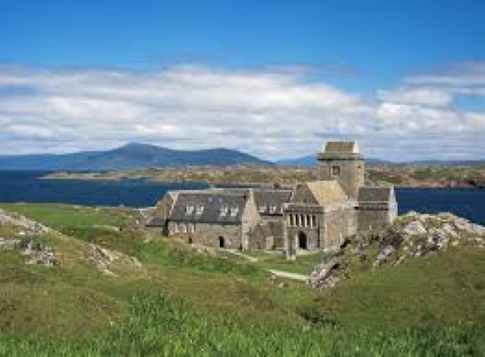 Colmcille spent the rest of his life on Iona praying, fasting, and teaching his monks to read and copy the Scriptures.

He was a renowned ‘man of letters’, wrote several hymns and has been credited with having transcribed over 300 books and manuscripts.

Colmcille died on Iona on 9th June 597 aged 75 and was buried by his monks in the Abbey he created.

In 794 the Vikings raided Iona. Colmcille's relics were finally removed in 849 and divided between Scotland and Ireland. The parts of the relics which went to Ireland are reputed to be buried in Downpatrick along with St. Patrick and St. Brigid. Others say he is buried at the nearby Saul Church.

St. Colmcille's Feas tDay, 9th June, has been designated as International Celtic Art Day. The Book of Kells and the Book of Durrow, great medieval masterpieces of Celtic art, are associated with Colmcille. 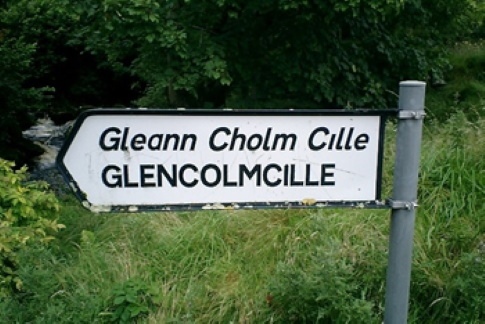 The pilgrimage at Glencolmcille (also known as Fr. McDyer's Folk Village Museum), in Donegal, takes place on the on the night of 9th June, starting after sundown. Pilgrims cover a 5km route, with 15 stations where rituals must be observed, and complete their journey before sunrise.

The pilgrimage route isrich in megalithic remains, some dating back more that 5000 years,and it is believed that the current pilgrimage occurs on a site where pagan ritual was commonly observed, indeed some of the structures that act as ‘stations’ on the route are certainly pre-Christian.