Seiriol was an early 6th-century saint, who created a cell at Penmon Priory on Anglesey, off the coast of north Wales.

He later moved to Ynys Seiriol (Puffin Island). He was a son of King Owain Danwyn of Rhos.

According to legend, he and Saint Cybi were good friends, and would meet weekly near Llanerchymedd, at the Clorach wells.

Saint Cybi would walk from Holyhead, facing the rising sun in the morning and setting sun in the evening. Saint Cybi was known as Cybi Felyn (Cybi the Tanned), as he was tanned during his journey. Seiriol, travelling in the opposite direction, from Penmon, would have his back to the sun.

Thus, he was known as Seiriol Wyn (Seiriol the Fair). Rhyd-y-Saint railway station ( Ford of the Saints railway station) on the Red Wharf Bay branch line near Pentraeth was named so, since Seiriol and Cybi are said to have met there.

Seiriol was a younger brother of King Cynlas of Rhos and King Einion of Llŷn. His cell at Penmon is said to have been rebuilt by his brothers, as they didn't think his humble residence was good enough. 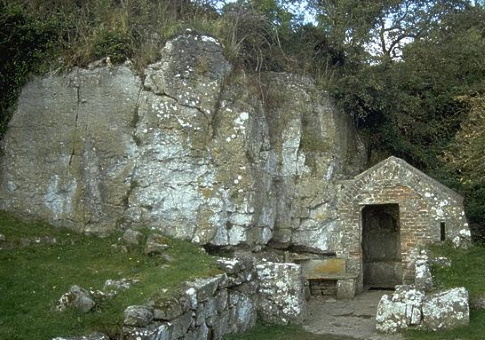 Both are protected by Cadw, the publicly funded body responsible for the historic monuments of Wales. Adjacent to them are the church and ruins of a monsatery also dating back to Seiriol's day.

In his old age, Seiriol retired to Ynys Lannog which subsequently became known as Ynys Seiriol. Later it would be known to the Vikings as Priestholm, and is known as Puffin Island in English since the 19th century.

Saint Seiriol is commemorated 1st February in both the Roman Catholic Church and Eastern Orthodox Churches. Trams on the Great Orme Tramway - Llandudno in north Wales - are named after local saints, #6 being Seiriol.