The Winter Solstice is the turning point of the year, beginning the lengthening of days. It has long been viewed as the birth of the year - by pagans celebrating the return of the Sun, and by Christians welcoming the birth of the Son of God. The days between Solstice and the New Year are a magical period when anything is possible.

In England, the Twelve Days of Christmas were considered omen days which could be used to predict the weather in the coming year.

in Ireland, tradition held that if a person died during the Twelve Days, he or she went straight to Heaven.

Everything has significance on New Year's Day, the first person to cross your threshold after midnight brings luck to the household in the British Isles. Read more at 31st December - New Year's Eve.

In Scotland, the best possible "first-footer" was a tall, handsome, dark haired man, who brought gifts of whisky, bread, a piece of coal or firewood, and a silver coin. He entered in silence, and no one spoke to him until he put the coal on the fire, poured a glass of whisky for the head of the house and wished everyone a Happy New Year.

Also in Scotland, no court had power during these days.

According to British folklore, you should not sweep on New Year's Day, or you will sweep your good luck away, or take anything out of the house - even rubbish and waste. You only want to bring new things in to ensure abundance in the coming year. If you must carry something out, be sure to bring something else in first, preferably a coin concealed outside the previous night. As this medieval poem reminds us:

Take out, then take in,
Bad luck will begin.
Take in, then take out,
Good luck comes about.

The first Monday in the year when a present or handsel was given by a master or mistress to the servants, and by fathers or mothers to children.

On that day people salute one another with “My Handsel on you.”

The actual date in any given year can be anywhere between January 1st and 7th.

This is an adopted Christmas tradition in Ireland, lesser known and slowly dying out.

The day mainly used to be celebrated in Scotland and northern England, but it made it across the Irish sea with immigrants and settlers. It was an occasion for gift giving at the start of the New Year, and it remained a Scottish tradition from the 14th until the 19th century. Later, it was replaced in the United Kingdom by Boxing Day that is celebrated a day after Christmas Day and is celebrated in a number of countries that previously formed part of the British Empire.

"Handsel" is believed to have its roots in the Saxon language, with a meaning of "delivering something into the hand". A handsel, in this case, is a kind of dues to be paid. Rather than a large tax, the meaning of the word is nearer to a small gift, either money or goods, more as a token to ensure good luck from the beginning of the year. In other words, a handsel would be a gift to mark and bless a beginning. The recipient feels lucky but the giver also avoids a spell of bad luck themselves.

In the 19th century, Handsel Monday was the day it was customary to give both children and servants a present. There were other superstitions about what would be an appropriate kind of gift to bring good luck while avoiding bad luck. For example, the gift should never be a sharp object because something sharp might "cut the ties". This kind of rule for gift-giving is seen in some other cultures as well, including at the start of Chinese New Year.

Another important rule attached to gifts on Handsel Monday concerned purses. If you gave a gift of a purse or a wallet, in order to ensure that the person using it in the future would never find it empty, it was customary to place a coin in it.

As Handsel Monday evolved, it became the day that tips were given to all of the servants of the house. It was not only the live-in servants who received money this day, but also the day to tip all service providers who came to the house on a regular basis - newspaper boys, the rubbish collectors, the postman, delivery boys from the local butchers, bakers and possibly candlestick makers as well.

In the 21st century, Handsel Monday is all but forgotten in Ireland, though in some families children are still handed small gifts on this day. 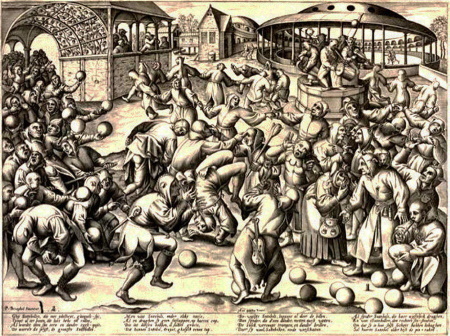 In ancient Babylon, the days between the Winter Solstice and the New Year were seen as the time of a struggle between Chaos and Order, with Chaos trying to take over the world.

Hindu, Chinese, Celtic cultures viewed this as a time for reversing order and rules - high ranked persons and officials would change roles with servants or dress in costumes for a time until order was restored.

(This engraving, by Pieter van der Heyden dated in the last part of 16th century, depicts the Feast of Fools. Some deemed that this was unseemly behaviour, and the Feast was banned in the 15th century, but is still mentioned in The Hunchback of Notre Dame by Victor Hugo written in the 1800's.)

In France, the children knock on their parents' bedroom door, pretending to personify health, abundance and joy, which the parents welcome.

Food eaten on New Year's Day is said to affect the quality of the coming year. The ancient Romans exchanged bay and palm branches hung with sweets, dates, figs and gilded fruits. The items hung on the branch expressed hopes the new year would be sweet, fertile, and prosperous.

The pig is the symbol of good luck in Vienna, Austria. Pigs are let loose in restaurants and everyone tries to touch them for luck as they run by. In private homes, a marzipan pig, with a gold piece in its mouth, is suspended from a ribbon and touched instead.

In Greece, it's customary to throw a pomegranate wrapped in silver foil on the threshold, to spread the seeds of good luck for an abundant year.

In Spanish-speaking countries, people put twelve grapes into their wine or champagne glass at midnight. The grapes represent the months of the old year and the new one. At the stroke of midnight, after toasting each other with the wine, people eat the grapes as quickly as possible, making a wish on each one.

Neapolitans still wrap dried figs in laurel leaves and exchange them as a kind of insurance of abundance for the coming year. They also make confections of caramelized dough and tiny almond pieces, so the year will be sweet. 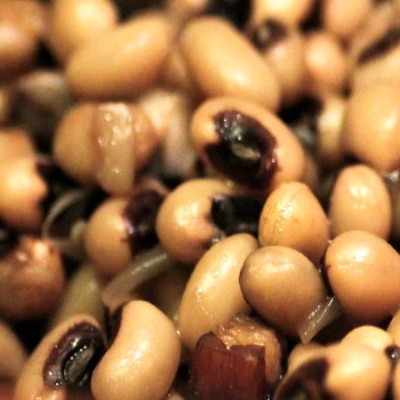 In the American South, it's traditional to eat cornbread, cabbage, and black-eyed peas on New Year's Day. The peas symbolize coins or copper money, the cornbread gold, and the cabbage green or folding money.

Although many of these customs may seem like superstitions, they all stem from a similar belief: by ending the old year with respect and beginning the new one in the way we would like it to begin, we establish our intentions for the new year.

And a personal one from Bernadette Mac - A very good friend made one up of her own tradition- she kicked the calender out the back door and then set fire to it.

If you have any traditions you can share please email them to email@taracelebrations.org and we will post them here.