Ciarán was born was born around 512 and reared in what the present-day Roscommon.

His father, Beoit, was a carpenter and chariot maker from North East Ulster and his mother Darerca was from Kerry.

Ciarán had a number of brothers and sisters. Some of them also entered the religious life.

Ciarán know as Ciarán mac an tSaeir, was one of the Twelve Apostles of Ireland and the first abbot of Clonmacnoise.

As a young boy, Ciarán helped his family herd cattle and studied his lessons while out in the fields. When he was older, he went to study with St. Finian at Clonard, Co Meath. There he was given a broad education in the company of many other of the saints of Ireland, notably, Columba and Brendan. He later studied on Aran with St. Enda, and later went to Senan at Scattery Island, where he was ordained a priest. After spending time in various monasteries, Ciarán eventually founded his monastery at Clonmacnoise.

In the 6th century Clonmacnoise was at the crossroads of Ireland being located at a point where the Shannon River running north to south, met the Eiscir Riada (a glacial gravel ridge) which crossed the country east to west. The location of Clonmacnoise had indeed a large part to play in it's becoming a major ecclesiastical sacred site.

He became very ill with a plague and died aged 33 at Clonmacnoise. His feast day is 9th September, the date on which he died.

Despite the young age at which he died, he had managed to found a monastic school whose fame would endure down the centuries.

The name comes from the Irish Cill Chiaráin meaning St. Ciarán's church. St Ciarán is the local patron saint for Kilkerrin. A pilgrimage is made to Tobar Chiaráin, his well, Leaba Chiaráin his bed and Altóir Chiaráin, on his feast day. Organised by the local festival committee, Coiste Fhéile Chill Chiaráin, there is a Roman Catholic mass performed at the well which St Ciarán blessed back in the 6th century. There is a grotto there with a statue of St Ciarán, which is the only statue to the saint in Ireland.

It is also known as Tobar an Bhradáin ( the well of the salmon). Tradition has it that the well miraculously produced a large salmon big enough to feed 150 monks. Pilgrim rounds are traditionally done at the well by the community on St Ciarán’s feast day. http://www.aranislands.ie/teampall-chiarain/

Teampall Chiaráin is in the village of Mainistir (meaning monastery)

It is said to have been founded by St Ciarán of Clonmacnoise who studied here under St Enda before sailing up the Shannon to establish his foundation at Clonmacnoise. The church which dates from about 12th century stands on the old site of Mainistir Chonnacht. Several cross-decorated slabs stand near the church. These may be old Tearmann crosses (boundary crosses). The most striking one is immediately to the east of the church. It is well decorated and has a hole in it indicating it may have been used as a sundial. Traditionally islanders draw a handkerchief or scarf through the hole for luck or fertility.

Legend tells us that the wells were formed at St. Ciaran's command and have healing powers.

This well was sacred long before St Ciaran arrived in the area. Unlike other places mentioned, the main pattern was held on the first Sunday of August, a Lughnasa celebration. Large crowds assemble at the pattern as the curative powers of the water are greatest then. Up to the middle of the last century horses were ridden through the stream on that day to preserve their health in the coming year

At Ciaran's Well, there is a large stone Oratory which was erected in 1913 on the top of the hill.

The well is across the river and accessed by two bridges. Sir William Wilde described it "As perhaps the most beautiful holy well in Ireland". Countess Markeivicz spoke there in 1917.

The waters at Ciaran's Well carry special healing powers, the water in one of the pools is said to have been the cure of headaches, toothaches and sore throats. Bathing feet in the tiny stream that flows from the well is said to preserve them from soreness during the coming year and healing of warts. The "cure" for warts involves visiting the well and getting a sample of water. On the way home, the wart sufferer must not speak. Then, once a day for three weeks they must put the water on to the wart and it will be gone by the end of the third week

Near the well there is a chair that is said to have the impression of the saint's back, and is believed to cure back ailments.

In 2019 Lughnasadh was celebrated at the Well - read more about the day, the unexpected challenge and see photos at 2019 - Our Own Harvest Time 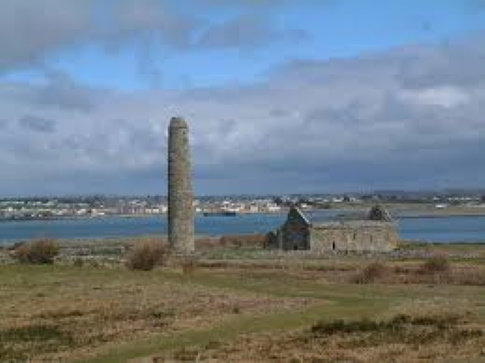 Clonmacnoise means ‘meadow of the sons of Nois’

The Church of Ireland hold an open air service on the last Sunday in July while the annual St Ciarán’s Pattern Day is held on the on the Second Sunday in September, or if possible celebrated on the 9th of September (St Ciarán’s feast day). The traditional Pattern Prayers takes approximately 4 hours. The well is considered to be the first stop on the pattern pilgrimage route now known as ‘the Long Station’. Bare footed, the pilgrim circles the well three times, stopping to repent at the stone bearing the crucifixion and then kissing the two stone images of the saints (one is now missing the other vandalized) and finally kneeling to give thanks at the cross slab. Then the pilgrims walk down the road towards the Nun’s Church to follow the glacial ridge as far as they are able. Most pilgrims stop shortly after the Nun’s Church because much of the esker ridge is inaccessible to walkers, but there are plans to renew and restore the ancient pathways. The people gathered at Clonmacnoise pray an adapted pattern with the Rosary.

There are many legends connected to St Ciarán and the treasures of his shrine were dispersed throughout the Medieval era. His Crozier however still exists and is stored in the National Museum of Ireland.

Ciarán went to study under Finian of Clonard, taking with him his favourite cow, which his family donated for his education. The monastery could profit from milk and butter, calves, meat or from the hide that would be turned into parchment. The skin of Ciarán’s cow was preserved in his memory and was noted for miracles – it had the reputation that every man who died resting on it would get eternal life. And later, the book written on this famous cow-skin, Leabhar na hUidhre, became one of Ireland’s most important manuscripts, the so-called Book of the Dun Cow. It is a collection of religious, historical, political and literary works. Today this unique folio, many pages of which are unfortunately damaged, is kept at the Royal Irish Academy.This is the book which preserves the legend of the Táin Bó Cuailnge.

Another story tells of when St. Ciaran was a student, a tame fox used to deliver the written tasks that he fulfilled to his teacher.

A single sack of oat turned into four big sacks

Once, at a time of famine, Ciaran prayed very hard to God so that a small amount of oats he was bringing to the monastery’s mill might be turned into good wheat. And while he still was praying, a single sack of oat turned into four big sacks of wheat of the best quality! When bread was baked from this wheat, the brethren noticed that it was the tastiest bread that they had ever eaten and it even healed some of them from sickness.