St Edmund was born on Christmas Day 841 of Christian Saxon parents. He is represented in Christian art with sword and arrow, the instruments of his torture.

He became King of East Anglia at the age of fifteen in 856 and fought along with King Alfred of Wessex against the Vikings, led by two Danish chiefs Hinguar and Hubba who had invaded England.

Defeated in 869, he was captured. The conditions of surrender the Vikings offered involved the betrayal of his people and the rejection of his Christian faith, so he refused. Edmund was tied to a tree and whipped and tortured.Then the Vikings began to shoot arrows at him.

Hinguar finally commanded that his head to be cut off. Edmund was 29 yeasrs old. It is uncertain where he was killed; some accounts state Bradfield St Clare near Bury St Edmunds, others Maldon in Essex or Hoxne in Suffolk.

From his first burial-place at Hoxne his relics were taken in the tenth century to Beodricsworth, since called Bury St. Edmunds, where a shrine and abbey were erected in his honour. King Athelstan founded a religious community to care for his shrine which became a place of national pilgrimage.

King Canute built a stone abbey on the site in 1020 to house the shrine. For centuries Edmund’s resting place was patronised by the kings of England and the abbey became increasingly wealthy as the cult of St Edmund grew.

Such was the influence of St Edmund that on St Edmund’s Day in 1214 rebel English barons held a secret meeting here before going to confront King John with the Charter of Liberties, the forerunner to Magna Carta, which he signed a year later. This event is reflected in the motto of Bury St Edmunds: ‘Shrine of a King, Cradle of the Law’. 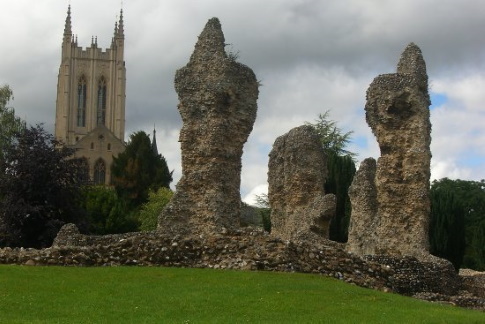 Devotion to St. Edmund the martyr became very popular in England. Many churches were dedicated in his honour. He was regarded as patron saint of England until during the reign of Henry II (1154-89), he was partly eclipsed by St Edward the Confessor (1003-66).

St Edmund’s influence began to fade when, during the Third Crusade in 1199, King Richard 1 visited the tomb of St. George in Lydda on the eve of battle. The next day he won a great victory. Following this triumph, Richard adopted St. George as his personal patron and protector of the army.

The cult of St George came to England with knights returning from the Crusades at the end of the twelfth century and it was during the reign of King Edward III (1327-77) who dedicated a chapel at Windsor Castle to the soldier that George came to be recognised as the patron saint of the English monarchy.

What became of Edmund?

During the Dissolution of the monasteries under Henry VIII, Edmund's remains were removed to France where they remained until 1911. Today they are kept in the chapel in Arundel Castle.

Should Edmund be Patron Saint of England?

But St Edmund has not been forgotten. An attempt was made in 2006 to have St Edmund reinstated as patron saint of England. A petition was handed into Parliament but it was rejected by the government.

In 2013 another campaign was launched to reinstate St Edmund as patron saint.

This was the ‘St Edmund for England’ e-petition, backed by the Bury St Edmunds based brewery, Greene King. This tongue-in-cheek yet serious campaign questioned whether St George, patron saint of 16 other countries, ever even visited England. It suggested he should be replaced by an Englishman, and who better than the Anglo-Saxon martyr-king St Edmund.