Yule or Yuletide is a festival historically observed by the Germanic peoples and is said to be the original celebrations of Yule. Connected to the Wild Hunt, the god Odin, and the pagan Anglo-Saxon Modraniht was an event on what is now Christmas Eve that focused on collective female beings according to Bede.

The events of Yule are generally said to have centred on Midwinter and feasting, drinking, and sacrifice (blót) were involved.

Evergreens represent everlasting life and were traditionally hung around doorways and windows. Each has a symbolism of its own.

Mistletoe - Greatly revered by the Druids, this is the healer and protector. It is carefully cut to ensure it never touches the earth. It's magical properties are believed to be connected to the fact that it lives between the worlds, between sky/heaven and earth. The white berries of mistletoe represent the fertile white semen of the life-giving male. Which is where kissing under the mistletoe comes from!

Holly an evergreen of protection, holly's spiky bristles are believed to repel unwanted spirits. Newborn babies used to be sprinkled with 'holly water', water in which holly had been soaked, especially potent if left under a full moon overnight. Holly is sacred to Holle, the Germanic underworld goddess, and symbolizes everlasting life, goodwill and potent life energy. Its red berries represent feminine blood.

Ivy - Evergreen symbol of immortality and resurrection, growing in a spiral reminding us ofreincarnation and rebirth. Sacred to Osiris, where His death and resurrection was a central theme in Egyptian religion. Sacred also to Dionysys, god of vegetation, blossoming and the Return of Spring.

Yew is the Tree of rebirth as it sends up new trees from its roots and grows to a very great age. It is deeply connected with the spirit realms and the ancestors. Often used as the central 'world tree' in ritual spaces and was often planted in graveyards. Very poisonous.

Pine - It's branches bring healing and joy to the home, burning it will purify your rooms. 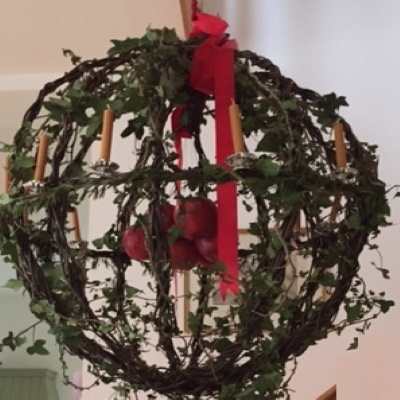 The Kissing Bough - At Yuletide it has often been customary to make a decoration using two hoops, one thrust through the other, and bound with evergreens, holly and ivy, and rosy cheeked apples specially reserved for the occasion. Inside, dolls are hung, male and female, with other brightly coloured baubles. At the bottom of the decoration a bunch of mistletoe is carefully tied, and the whole tableau is suspended in the middle ofthe room, the centre of attention. Every berry on the mistletoe bears the promise of a kiss, and for every kiss given or taken a berry is removed. When all the berries are gone, the kissing has to stop!

The Wreath - It was traditional to make wreaths from evergreen - the Wheel of Life as evergreen. These were hung on doors or laid horizontally and decorated with candles - later becoming the Christian Advent Wreath.

The Yule tree was introduced into modern times by the German Prince Albert in Victorian times. In ancient Rome, pine trees were an essential part of Goddess groves. On the eve of the Midwinter Solstice, Roman priests would cut down a pine tree, decorate it and carry it ceremonially to the temple celebrations. People decked their homes with boughs of evergreen trees and bushes in pots. Pines and firs were cherished as a symbol of rebirth and life in the depth of winter. It was the festival of Saturnalia.

Pagan families would bring a live tree into the home so the wood spirits would have a place to keep warm in the cold winter months - food and treats were hung on the branches for the spirits to eat.

Candles - This is the festival of light out of darkness and the tradition of lighting candles is ever popular. Red, green and the gold of the Returning Sun are the colours of Yule. Deck your home and altar with evergreens and candles.

Gift Giving - the giving and exchanging of gifts has always been a vibrant tradition of this festival.