Confirming that the Hill of Tara is a beacon, the hub and fulcrum for Tara Celebrations, in 2017 we joined in a Chain Reaction of Samhain energies, with the intention of carrying that foundation into the next cycle by coming back to base, starting the year by lighting a central lantern, taking our own lights and spreading out into the community through time and space.

When looking at the photos afterwards we saw a red mist on some of them - in hindsight we did of course call in the local Gods and Goddesses and Medb Lethderg (`red-side`) is land goddess of Sovereignty at Tara..

Lists of names, the oldest compilations, such as the 11th-century Lebor Gabála Érenn, provide some legendary characters and others known to be historic figures.

Stories are woven about them, their exploits, their Druids, their interreaction with St. Patrick etc. 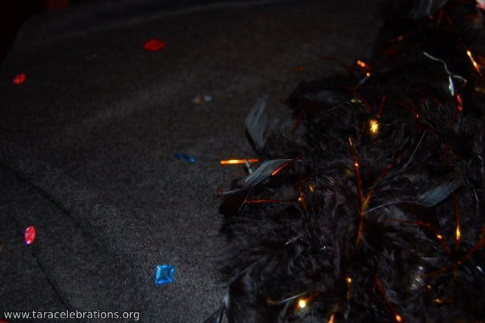 Part of the ritual of Kingship at Tara was the king taking a cloak that would magically fit him.

In 2010 we honoured our own sovereignty, our divine essence, by placing a cloak of sovereignty on our shoulders and recognising the bigger version of self.

Becoming a sovereign self affords us an opportunity to try a new way of life, to emulate traits we find desirable in someone inspirational, become someone new, become the next grander version of ourself...

... and it need not be a gravitas task... we made sure to bring our sense of humour!

Pictured is the Cloak of sovereignty with added bling for the New Year.

According to the 16th/17th century priest and historian Geoffrey Keating in his ‘Foras Feasa ar Éirinn’, the feis (festival of arts and culture) of Tara was held for a week every third Samhain - though other sources say every year - when the nobles and the highest ranking judges (ollamhs) of Ireland met to feast and to renew and set new laws. It may also have been that at this feis the ancient ritual of inaugurating the High kings of Tara was held.

Hopefully the sun rises and shines into the short passageway of the Mound of the Hostages, Tara, at Samhain and Imbolc...

Bernadette Mac and Amy in 2019

Honouring our ancestors on Samhain at the fairy tree on the Hill of Tara, Sunday the 3rd of November.

As myself and Amy walked to the fairy tree to drum for healing for ourselves, loved ones near and far and these who are no longer with us but are always there in spirit, a beautiful mist came over the land, surrounding us in a blanket.

Blessed or beloved, reviled or forgotten, generations amass, no harm, no fear.

Slither silently within darkening shadows, whispering quietly to those who hear.

Seeking creation's love, eternal, we reach out to the strangeness of a deathly bier.

Time dissolves, souls gather, celebrating sacred Samhain of the wheel of the year