These changes have brought fresh energy and new experiences for everyone, and keeps the flow going.

We regularly change the banner or poster but the foundation of meditation and healing circle was established from the outset.

It is wonderful to look back, acknowledge what has been, those that have attended the meditations, the places that have shared our silences as well as our laughter and tears, and our sacred times together. 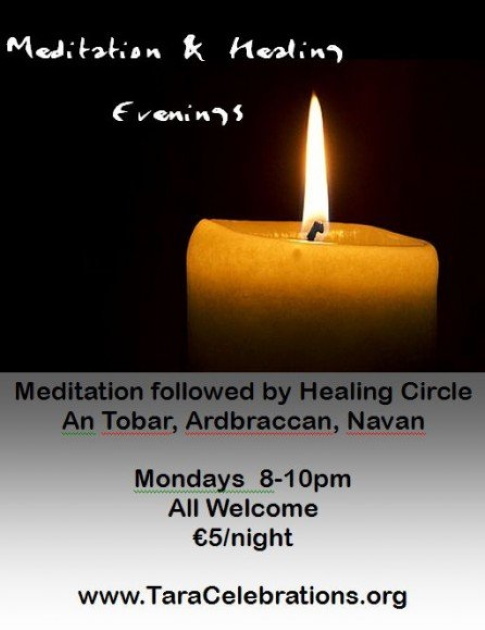 It is good to look forward, to the next Monday, starting the week in friendship, peace, contemplation and relaxation.

And it is sensible to be 'in the now', living every moment with the wisdom we all carry, in the magic of being on Earth, grounded and secure, anchored in our lives.

Monday Meditation and Healing Circles were held at An Tobar, Ardbraccan, from to 5th November 2007 to 28th January 2013.

The first intention was to meet for seven Mondays, leading up to Christmas in 2007. Everyone enjoyed it so much it was agreed to extend indefinitely... and so the get-togethers have continued! The meditation flyer was posted in the Library, local shops and An Tobar.

The last Meditation was held on 2nd September 2019. It was a wonderful five years since the first meditation on 24th February 2014. Following the fire in the Mill at Bective, and so losing the room we were using, they kindly let us use other space, but it was felt we needed somewhere more permanent, and so we moved to Trim. 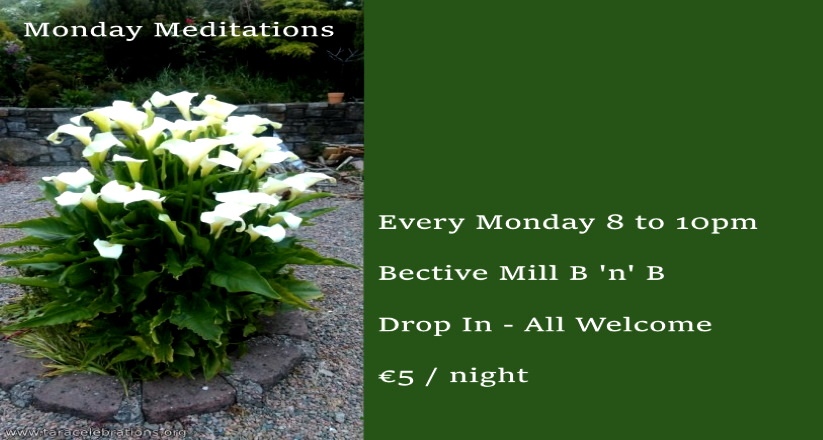 We had been at Trim for just over 6 months when news came that there was a pandemic on the way and we would not be able to meet. After discussions it was announced that during the Covid-19 (Coronavirus) emergency - Tara Celebrations Monday Meditation & Healing Circle were put on hold. The 9th March 2020 was the last face-to-face meeting.

On the 16th March 2020 people were invited to light a candle at 8pm and tune in from their own homes.

'Lockdown' became a familiar phrase in the following weeks. Gardaí now had the power to arrest and detain those who breached the restrictions. This included those found exercising beyond 2km from their homes or those travelling for non-essential reasons.

The first Zoom meddi was held on the Monday 23rd March 2020. Bernadette O'Connor hosted the evening and anyone could attend once online. Because Zoom had a time restriction two weeks later the evening was moved to Skype. This allowed for the usual meditation and healing circle, then for a bit of social chat, which would be usual course of the evening. Pat took over on 13th April using Jitsi conferencing on-line. Others started offering to host and Martin covered the following week from Galway. Slowly the network expanded to include Europe, Iceland and U.S.

Questions and Answers about our Pandemic Meeting:

So there’s a global pandemic, entire countries are in “Lockdown”and there are scenes worldwide not seen in generations – so it might be safe to assume that there will be no meditation/healing meeting for the Tara Celebrations group for a while.

Not so because we’re a very resilient bunch and we seem to find a way to have our meetings one way or another. This time it’s with the help of both modern technology and the ancient art of “distance healing” so for the last few weeks we’ve been meeting online using Skype. I must admit at first there was a degree of trepidation among members: surely a group Meditation wouldn’t work if we were all in different locations – different countries even? Surely a group Healing wouldn’t be of any benefit? It’s not as if the healing energy could zip around the world piggy-backing on the world-wide-web, is it?

Not exactly, but in my experience (and others I’ve spoken to) both the meditation and the healing DID work, was very beneficial and left us looking forward immensely to the following week. So there ends the story - or does it? We Skyped a meditation / healing session, it worked, it was great and we’re going to do more. The thing I want to know is why did it work? How did it work? (So many questions –when will we get answers?)

On Monday 17th August 2020 a Reunion was held at Bective Mill, combining a Monday Meditation with Lughnasadh celebration. It was agreed meditations could be held outdoors with social distancing and thus returned to Bective on 24th August 2020.

Unfortunately, the return of meditations at Bective were short-lived as restrictions returned.