At sunset on 23rd June, the mid-summer festival begins.

A fire festival known as St. John's Eve, or Bonfire Night, and not that long ago, it was a wide-spread tradition throughout Ireland. It was traditionally marked by lighting large fires throughout the countryside as the sun went down. The fires had to be watched and tended until long after midnight. Prayers use to be said to obtain God's blessing on the crops. It was mainly women who shared in the prayers for the gardens, crops and for good weather. The prayers were to ensure a plentiful harvest and to make sure "the white trout come up the river" with the mid-summer floods.

The fire itself was thought to have magical powers. Burning weeds in its flames would prevent arable fields from becoming overgrown, while scattering it's ashes on the fields would guarantee the land’s fertility.

In some places the young men would march through the fields with lighted branches from the bonfire to protect the crops from disease and pestilence.

In others the young men used to walk through the fields with lighted torches and then cast these into the fire to bring a blessing on the fields and protect the crops from harm. different customs but the same underlying theme.

It was considered lucky to bring some ashes home to light the kitchen hearth.

Another custom was that rosary beads, little statues or scapulars, when they became broken or worn out were destroyed without disrespect by being burned in the Midsummer Fire.

People gathered to dance and sing, stories were told, and young men proved their bravery by leaping through the flames.

Although most of these customs are no longer practised, lighting St. John’s bonfires still takes places in many parts of Ireland. It is hardly a coincidence that these fires are lit so close to the Summer Solstice and it suggests that the custom may have ancient roots.

In most fishing districts, St. John's Day was important as it was the day the boats and nets were blessed. On the rivers, anglers eagerly anticipated the arrival of sea trout which came up the rivers at this time of year.

Unless the weather proved too cold, summer swimming began on St. John's Day and the observance of the festival was supposed to eliminate all danger of drowning. 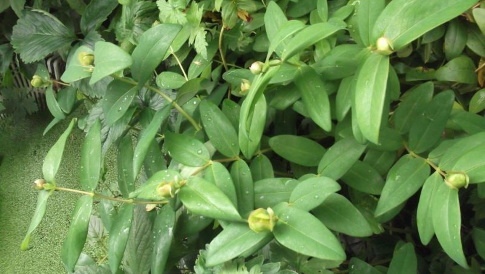 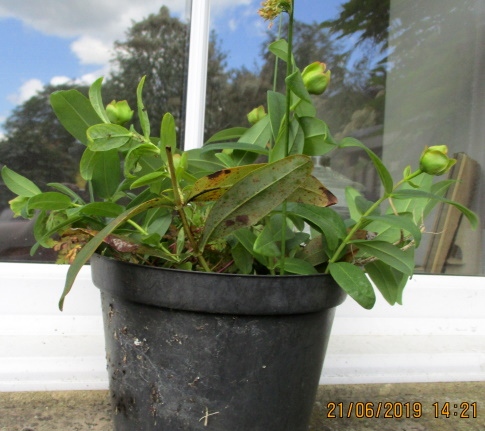 Overall though, it was a time of optimism, with farmers hoping they'd get a period of wet weather before St. John's Day and dry weather afterwards. This year we are certainly getting the rain beforehand!

Traditionally, women gathered herbs on St. John's Eve. These vary from area to area, but on the Feast of St. John, it is customary to gather the perennial herb St. John’s Wort, which flowers at this time and has many uses. The herb is hung over windows and doors for protection.

Yarrow is also in flower and has been used since ancient times for healing wounds, and it's essential oil has anti-inflammatory properties. Yarrow was also used as a ward against evil, and traditionally it was burned on the Eve of St John's Day.

In ENGLAND, the feast of St. John the Baptist, is one of the quarter days.

On JERSEY the day is known as "Les cônes d'la Saint Jean" and was observed as late as the 1970s - horns or conch shells were blown. Ringing the bachîn (a large brass preserving pan) at midsummer to frighten away evil spirits survived as a custom on some farms until the 1940s and has been revived as a folk performance in the 21st century.

In FRANCE, the "Fête de la Saint-Jean" is celebrated with bonfires. In the Vosges region and in the Southern part of Meurthe-et-Moselle, this huge bonfire is named "chavande".

In ITALY Saint John the Baptist is the patron saint of Genoa, Florence and Turin where a fireworks display takes place during the celebration on the river. In Turin Saint John's following is well-established since medieval times and the city stops work for two days and people from the surrounding areas gather to dance around the bonfire in the central square. In Genoa and coastal Liguria it is traditional to light bonfires on the beaches on Saint John's Eve to remember the fires lit to celebrate the arrival of Saint John's relics to Genoa in 1098. Since 1391 on the 24th June a great procession across Genoa carries the relics to the harbour, where the Archbishop blesses the city, the sea, and those who work on it.

In GERMANY it is celebrated as Sommersonnenwende.

In GREECE it is called Klidonas (Κλήδονας) meaning sign or oracle, and was considered a time when unmarried girls would discover their potential partners through a ritual.

HUNGARY celebrates "Saint Ivan's Night" , and in ROMANIA the Midsummer celebrations are named Drăgaica or Sânziene. Drăgaica is celebrated by a dance performed by a group of 5–7 young girls of which one is chosen as the Drăgaica. She is dressed as a Bride, with wheat wreath, while the other girls, dressed in white wear a veil with bedstraw flowers.

In PORTUGAL there are St John's street parties in many cities, towns and villages, mainly between the evening on the 23rd and St.John's Day on the 24th June. Bonfires are lit on the beaches and there atre alos fireworks. one of the biggest festivals is held. At Porto, Festa de São João do Porto, after the bonfire and fireworks, many head for the sea. They wait for the sunrise, and some swim in the ocean as the sun rises.

This midsummer tradition is especially strong in north-western areas of SPAIN, especially in Galacia, where San Xoán festivals take place all over the region; bonfires are lit and firework displays usually take place. On the Mediterranean coast, bonfires are lit on the beaches in Catalonia and Valencia, special foods, such as Coca de Sant Juan, are also served on this occasion.

ESTONIANS celebrate "Jaaniõhtu" with bonfires. On the islands of Saaremaa and Hiiumaa, old fishing boats may be burnt in the large pyres set ablaze.

In POLAND the festival is known as 'sobótki'. Traditional folk rituals include groups of young men and women singing ritual songs to each other. The young women may wear crowns fashioned from wild flowers, which are later thrown into a nearby pond or lake. The boys/young men may then swim out to claim one of the crowns. Bonfires (and bonfire jumping) are also part of the proceedings.

In NORWAY, as elsewhere in Scandinavian countries, this event is celebrated with a communal bonfire. The event is also known as Jonsok, meaning "wake of Saint John".

It is known as Midsommar in SWEDEN. Originally a pre-Christian tradition, now influenced by Christian traditions and the celebration of Saint John, . A central symbol nowadays is the 'midsummer pole', a high wooden pole covered in leaves and flowers that is raised on the same day as midsummers eve. . A Saint John’s Eve custom involves people visiting Holy wells as "a reminder of how John the Baptist baptised Christ in the River Jordan."

In FINLAND the summer solstice was called Ukon juhla ("Ukko's celebration") after the Finnish god Ukko. Later the celebrations became known as 'juhannusafter', John the Baptist.

At Barrule, well into the 19th century, bundles of grass were laid down for the Celtic God of Man & Arran, Manniman-beg-mac-y-Lear, who appeared as a heron and would be seeking women to court.

On this day the annual Tynwald was formerly held at St. John’s. It is now held on July 5th.